In the church planter training today, I’ve been learning why the word “leadership” makes me grimace. It’s because of my leadership style. The word “leadership” has a specific autocratic connotation to me that I define myself against. We took a leadership style assessment today called the DISC inventory, which is based on the premise that there are four poles for understanding leadership style: [D]ominant, [I]nfluential, [S]teady, and [C]onscientious. A “D” is an authoritarian who takes charge; an “I” is a cheerleader who tries to win everybody; an “S” is a shepherd who focuses on individual relationships, and a “C” is an implementer who follows the rules. According to the inventory, I’m an “I” who’s in denial about the part of me that’s a “D.” Because I’m a cheerleader, I define myself against authoritarians.

This graph shows how these four leadership styles contrast with one another on two axes: big picture vs. detail and task-oriented vs. people-oriented. 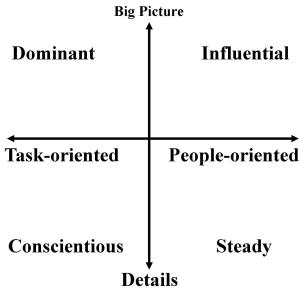 Since I’m an influencer, I think in terms of big picture and people. A lot of the “I” qualities do fit me pretty well. When I think about what I’m supposed to do as a pastoral leader, it’s to inspire others to discover what God wants them to do, which is different than telling them what I think God wants them to do (which may be what I’m really doing but isn’t what I want to think that I’m doing). I’m very committed to the principle that God speaks through all of the people in a congregation and the pastor is supposed to listen to the membership to discern what God is saying and share it back with the congregation.

Because I believe that God speaks through everybody, I tend to seek out and try to win or reconcile with whoever is disgruntled. This is not entirely a good thing. If I’m preaching and somebody in the pews is scowling, I subconsciously start to backpedal and try to figure out how to word things differently. I’ve also invested a lot of time and energy into trying to charm people that were unwinnable. One of the things that made me laugh was when our facilitator described the example of a committee meeting led by an “I” in which 7 out of 8 people are in agreement on a decision, but the “I” tables the discussion because one person disagrees. It’s a caricature, but it’s somewhat true.

One of the reasons spiritual leaders like me hate being authoritarian is because we have an innate need to know what others are thinking and where we stand with them. It’s not enough for people to go along with what we want to do because we demand it assertively enough; we need to know that they’re genuinely enthusiastic about it, because we evaluate our fruitfulness as cheerleaders not according to a set of achievement milestones, but according to the enthusiasm level of the people we’re shepherding. It’s less important that people follow my particular vision than that I am able to discover and articulate where God is creating synergy and successfully inspire others to see it.

There are two basic leadership profiles that seemed best to fit me based on my combination of the four leadership style categories (high I, semi-high D, low S, lowest C): entrepreneur and motivator. This makes a lot of sense to me because the two things I do the most in ministry are coming up with new ideas and helping other people discover their gifts and find their niches. Though both of these tendencies are good qualities to have, they can also create a lot of mess. I’m often too quick to start new things when I haven’t finished what I’ve already started. I also have a tendency to over-encourage people. Sometimes my genuine excitement about other peoples’ potential causes me to say more than I should and set others up for letdowns or misunderstandings.

Anyway, this workshop is helping me to learn a lot about myself. I tend to be cynical about any kind of test that involves a bubble sheet, but this one fits a lot better than the Myers-Brigg designations, since everyone in America who wants to be popular makes themselves an ENFP like I supposedly am. As an “I,” I tend to get annoyed by “C” type people who are detail-oriented rule-followers, but they also are the most valuable people to have on my team to counterbalance my own tendencies to view everything macroscopically and fudge on principles for the sake of creating enthusiasm and synergy. The other interesting thing is that according to my leadership style, I’m supposed to use my own personality centrally as part of my leadership and somehow do this without becoming a narcissist. So I’ve basically been encouraged to own the fact that I’m an insufferable diva and channel that to the glory of God, attracting people to myself and then pointing them to Jesus. I’m not sure how I feel about that. It kind of makes me want to throw up. I don’t agree with everything that’s being said here, but it sure is giving me a lot to think about.

7 thoughts on “Why leadership is my least favorite word”